There's a Nightmare in My Closet! 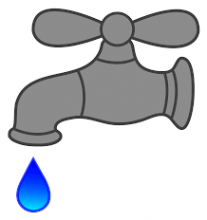 Set your minds on things above, not on earthly things.” Colossians 3:2

It started as a slow methodical drip that only my ears heard as its consistent rhythm would lull me to sleep. Over the course of time, the drip’s speed progressed to the sound of raindrops falling against my shower tile, which finally had Ken’s attention. By the time an available plumber could be located, the once small leak had evolved into a steady stream.

When the plumber finally arrived at our house, I was prepared to give him a hero’s welcome including a red carpet and trumpets! As he assessed the situation, it didn’t take long for him to share the dreaded news; “In order for me to fix this, I need to get to the pipes, which are located behind this wall." Both my husband and I froze in horror as he pointed to our boys’ former bedroom closet.

Now I wish that I could tell you that when both of them moved away from home after college, they took all of their treasured possessions with them and that closet now stood empty. However, the reality of the situation is that time basically froze inside that closet, and despite their current ages of 31 and 28, their entire life history still could be found among the contents located inside. Unfortunately, our only hope of fixing the leaky shower was to remove everything from the closet that had evolved into a very large time capsule.

So last Saturday, I mustered up the courage to face this giant challenge and opened the door to memory lane.

During my quest, I found things that ranged from Pokémon cards, Star Wars figurines, St. Matthew and Lutheran Westland diplomas, and a broken pole vault pole that once served as a badge of courage. Since both boys were extremely active in DI, hundreds of DI pins and T-shirts were found. In addition, both of my sons were extremely athletic so enough hardware from participating in soccer, wrestling, and track most of their elementary through high school lives filled two huge tubs. Ties that were still in their tied positions, which saved time during their early morning school departures, were present. Also, minion and Ninja turtle costumes were unearthed, because you never know when those may come in handy!

When I had organized and packed it all up, I took a photo and sent it to both of them and asked what they wanted, and to my shock and horror, I received one response, "I'm totally fine if you just get rid of all of it."  Instantly, my mother's brain and teacher's hoarder tendencies screamed "WHAT? WHY WOULD I DO THAT?"

Then the shocking reality hit me, all of these material goods that once were so important during that season of life, were no longer as meaningful as they once were. So I did what every other mother who can't part with her children's past does... I dragged it all into our basement!

A powerful song by Casting Crowns entitled "Only Jesus" has lyrics that so beautifully summarize verses in Scripture that state that the only thing that will last forever is Jesus. Therefore, “Set your minds on things above, not on earthly things” (Colossians 3:2). Trophies, medals, accomplishments, etc. may be important for a season of life, but they will eventually tarnish and lose their importance. However, through Jesus, we receive eternal rewards and blessings that will last forever! As parents and teachers, what a gift we have that we can share the love of Christ with the children entrusted into our care on a daily basis and point them in the direction of the most important person, Jesus, during every circumstance.

May God bless you with awesome opportunities this week to have some sweet spiritual discussions with your children!

In His Love,
Mrs. Palka

P.S. On Mother's Day, Ken yelled up the stairs as I was getting ready, "Sue, I think we have another problem... there's now water in the kitchen light fixture!" Guess it's time for more cleaning!